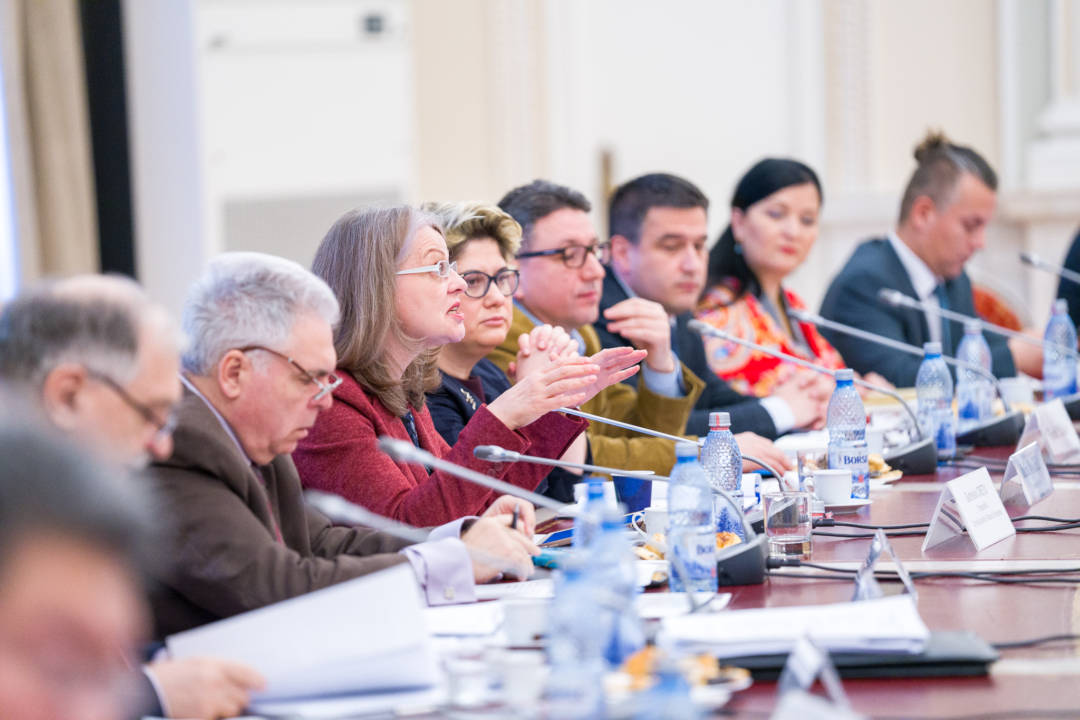 The Senate Committee on European Affairs organized a debate generated by sociological research 2020 – A draft on Romania’s foreign policy. Challenges and opportunities.

The conclusions are dramatic and the Foreign Office should take them into account.

The survey was based on 80 respondents, experts and practitioners of international political relations and will generate an analysis report on the challenges and opportunities for Romania’s foreign policy in 2020 by the Center for Foreign Policy and Security Studies (CFPSS), in partnership with the EURISC Foundation and the Middle East Political and Economic Institute (MEPEI).

The three think-tanks set out to actively engage and launch a ‘Alternative Public Policy Foundation Programme’ in the context of the European Commission President’s call to support her current geopolitical visions, the ‘Conference for the Future of Europe’, and other initiatives.

The approach was carried out in the context of worrying global developments in recent times, with an impact on both our local, regional and global security environment, as well as on the strategic options of the partners in whose structures Romania has integrated economically and securely, as well as as as a result of the worrying result by which Romania lost its non-permanent membership in the UN Security Council in June 2019.

The project’s initiators consider that international relations are now increasingly volatile, with traditional alliances being redefined and often leading to reactive and less proactive foreign policy behavior. The (proactive) role is to take into account opportunities and foresee potential risks and threats from the perspective of a redefining national interest.

The constant, and sometimes almost exclusive, reference to membership in international organisations, institutions and alliances can no longer be sufficient for Romania’s foreign policy, nor can it be a sure landmark in an increasingly complex international security environment, with extremely dynamic and often unpredictable developments. Thus, we appreciate that Romania, a Member State with a share in the European Union (EU) and NATO, is a balanced pillar with an important potential, insufficiently valued.

From the results of the research, it is noted that NATO and the European Union remain the main vectors shaping Romania’s foreign policy, while the United Nations, the World Trade Organization, the Organisation for Economic Cooperation and Security in Europe, and the Council of Europe are regarded as having moderate influence. By contrast, national corporations are in second place as the maximum influence on Romania’s foreign policy, receiving a maximum allocation of value among 25.61% of respondents, and only 17.7% of them allocate a maximum value to the Romanian Parliament’s influence on foreign policy and 12.20% of respondents allocate it to political parties.

In 87.80% of responses we identify the risk that the US will reconsider its commitments to Europe if President Donald Trump wins a second term. Such a trend is most likely favored as a result of the approach to different policies from western EU states such as France and Germany towards the US, including in relation to Russia and China. On the other hand, over the past two decades, US policy on the Middle East has been a direct, cutting and tough one, while the EU is pursuing a policy of negotiation, reconciliation, humanitarian and pursuing its own economic interests. The unilateral withdrawal of the US from the Iranian nuclear deal has caused the EU (E3) to choose between following the US decision or trying to protect its own economic interests. Then, the second big challenge between the US and the EU is the Israeli-Arab issue (“understanding of the century” and “moving embassy headquarters”);

74.39% of respondents vote in favor of Romania’s membership of the European Intervention Initiative;

Respondents identify the top three risks to Romania as “the isolation of Romania by diverting major energy and transport infrastructure projects”, at a rate of 58,54%, “the lack of notable initiatives that could lead to Romania’s isolation in the European Union”, 56.09%, and “an open conflict between the US and the Russian Federation”, 53.66%.

On the other hand, more than 40% were identified as low-risk themes such as ” invasion of Romania’s territory by troops belonging to the Russian Federation”, “continuation of EU enlargement to Ukraine, Georgia and the Republic of Moldova” and “implementation of 5G technology offered by Chinese company Huawei”.

Respondents agree on a more assertive foreign policy, and this is supported, 65.86%, by the need to increase the budget allocated to the Ministry of Foreign Affairs;

Note: The data sets and information used are work in progress and may undergo some subsequent changes.

Senator Gabriela Crețu, Chairman of the Committee on European Affairs, explained the European agenda in the current international context and stressed that lately, with the advent of transnational corporations, we are dealing with two types of maps, namely a political one over which states still have some control and another economic one, different from the former.

Iulia Matei, Secretary of State for European Affairs, pointed out that “Romania has demonstrated a real capacity to successfully exercise the mandate of the Presidency of the Council of the European Union and will continue to take an ambitious and at the same time realistic approach to developments at European level”.

Among the main international trends identified by the participants in the debate were the volatilization of international relations; the erosion of the legal and administrative framework of a rules-based order guaranteeing the borders, rights and obligations of each State;the fragility of the economic system resulting from globalisation and the ability to rapidly propagate risks, vulnerabilities and threats;

The Westlessness,in economic and military terms, was highlighted by emerging powers and the re-emergence of ambitions of regional hegemony, while revisionism and revanchist are becoming increasingly powerful phenomena in today’s world.

The use of hybrid warfare or next-generation warfare to pursue state interests, undermining formal and customary mechanisms of solidarity in the face of aggression, is another current reality.

It will increase transactionalism as the basis of international relations and diminish multilateralism in favor of unilateralism, bilateralism and minilateralism.

Romania will continue to rely on strengthening its strategic partnership with the US and membership within the EU, but it is recommended that it be realistic and analyse the situation in line with controversial developments at the international stage.

There has been, inter alia, support for foreign policy efforts outside the European Union and NATO (e.g. China, Russia, the Middle East/MENA). Thus, it would be difficult for the Ministry of Foreign Affairs to take on its own all the effort and responsibility for these reform efforts of Romanian foreign policy.

It was pointed out that Romania currently has a status problem, and in the new context has the opportunity to bridge the gap with other EU countries.

Several speakers argued for the need for the structure of the MFA to adapt to the new international conditions in order to promote an active and flexible foreign policy based on professionalism and meritocracy.

For the boosting of foreign policy, the urgent need to increase the MFA budget for the proper financing of diplomats according to the statutes, for the renovation of embassy premises and/or the provision of competitive work-spaces was highlighted.

Based on the results of the survey on the normalization of the relationship with the Russian Federation, the opportunity for dialogue with the Russian side on the basis of the good neighbourly policy was analysed, but also on the condition that Russia considers it an equal partner at the negotiating table. Romania cannot afford to repeat history – a Russian-German/Western understanding or a Russian-American understanding to the detriment of its own interests. Also, in recent times, Romania has become increasingly isolated by the riparian states on the influence of control in the Black Sea.

Also following the results of the survey, it was discussed that Romania, being interested in a multipolar world order, would promote a strategic link with China without getting involved in the trade war with it.

Digitalisation of the foreign policy field, the use of international experiences in the fields of artificial intelligence, block-chain and others, can lead to the creation of a functional, participatory and inclusive platform, in communicating with stakeholders at national and international level, including interested members of the diaspora. Thus, the need for the involvement of the intellectual diaspora was identified, due to the large number of graduates of university institutions abroad and their expertise in relevant fields.

In the context that 2019 is considered to have generated the most unexpected changes, sudden and strong intensities at the level of the states of the Middle East and North Africa region, as well as the modelling of the influence of major US world players (the oscillation on military withdrawal), Russia (strengthening position and influence) and China (“a game changer“), it is recommended to re-examine relations with MENA states following a pragmatic path, namely through bilateral relations or through relations through the EU and/or through relations with US aid.

Today, against the background of the continued diplomatic relations with Syria, being, together with the Czech Republic, the only EU Member State that has not closed its embassies, Romania has the possibility, on the basis of traditional relations and the large number of the Romanian diaspora, to become more involved by offering good offices between different parties involved in the Syrian crisis.

TO REDEFINE THE NATIONAL INTEREST

Building on the responses obtained in the survey, the need to redefine the national interest beyond what was presented in the Romanian National Defence Strategy 2015 was outlined.

The extensive exercise by Romanian diplomacy during the period of Romania’s Presidency to the European Union is a basis for a new organisational performance, as well as for the formulation and implementation of a foreign policy with a new dynamism.

The Center for Foreign Policy and Security Studies, in partnership with the EURISC Foundation and the MEPEI Institute, conducted the survey to support a sustained effort to involve civil and academic society in the formation of national security and international relations policies. In this context, the need to emphasize the role of think-tanks in a democratic society is shaped, namely to engage in the fight against ideas, providing expertise, each on its own space, based on research and relevant evidence about international relations and affairs.

In the coming period, a larger material will be developed containing the extensive interpretation of the survey results, as well as a number of recommendations, and the material can be disseminated among all interested parties, in order to contribute to the debates necessary to advance Romania’s interests in the new security environment.