Radovici Mihai Christopher Marian is a MA student at University of Westminster, London, in constant pursuit of personal evolution and community development. With a wide pool of interests, in often diverse subjects, he has managed to showcase his involvement in a wide range of activities.

In regards to his educational and professional path, Mr. Radovici has been quite a dedicated person. In 2016, he finished, as a valedictorian, courses of the “Petrache Trișcu” Sports High-School where, in his last years there, he practiced and refereed fencing. Afterwards, he enrolled in the bachelor’s program in International Relations and European Studies at the Faculty of Social Sciences in his hometown. He jump-started his career with an internship at the Ministry of Foreign Affairs in the summer of 2017, followed by the Study of the U.S. Institutes for Student Leaders where he approached Social Entrepreneurship intensively at the University of Tennessee Chattanooga, New York City and Washington DC. In the meantime, demonstrating a passion for writing since his teenage years, he has published 9 articles (apart from those written as a member of various organizations) and 3 books as an author and co-author.

In recognition of his accomplishments, he has also received a number prizes in various competitions and contests. Of particular note is his nomination out of 100 Romanian participants as volunteer of the year 2014 in the social field at a County Gala, later becoming Advocate of Children’s Rights and Honorific Ambassador on the Equality of Chances of Women and Men; and his decoration in 2017 at the Elisabeta Palace as one of the few golden finalists of the Duke of Edinburgh’s International Award Romania, its first generation of members. 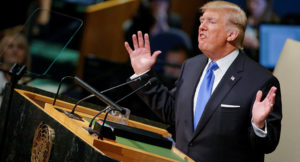 Donald J. Trump Under the spotlight at the U.N.

On the 18th of September 2018, the world  united to do some talking, future planning and action taking at the U.N. General Assembly. And...