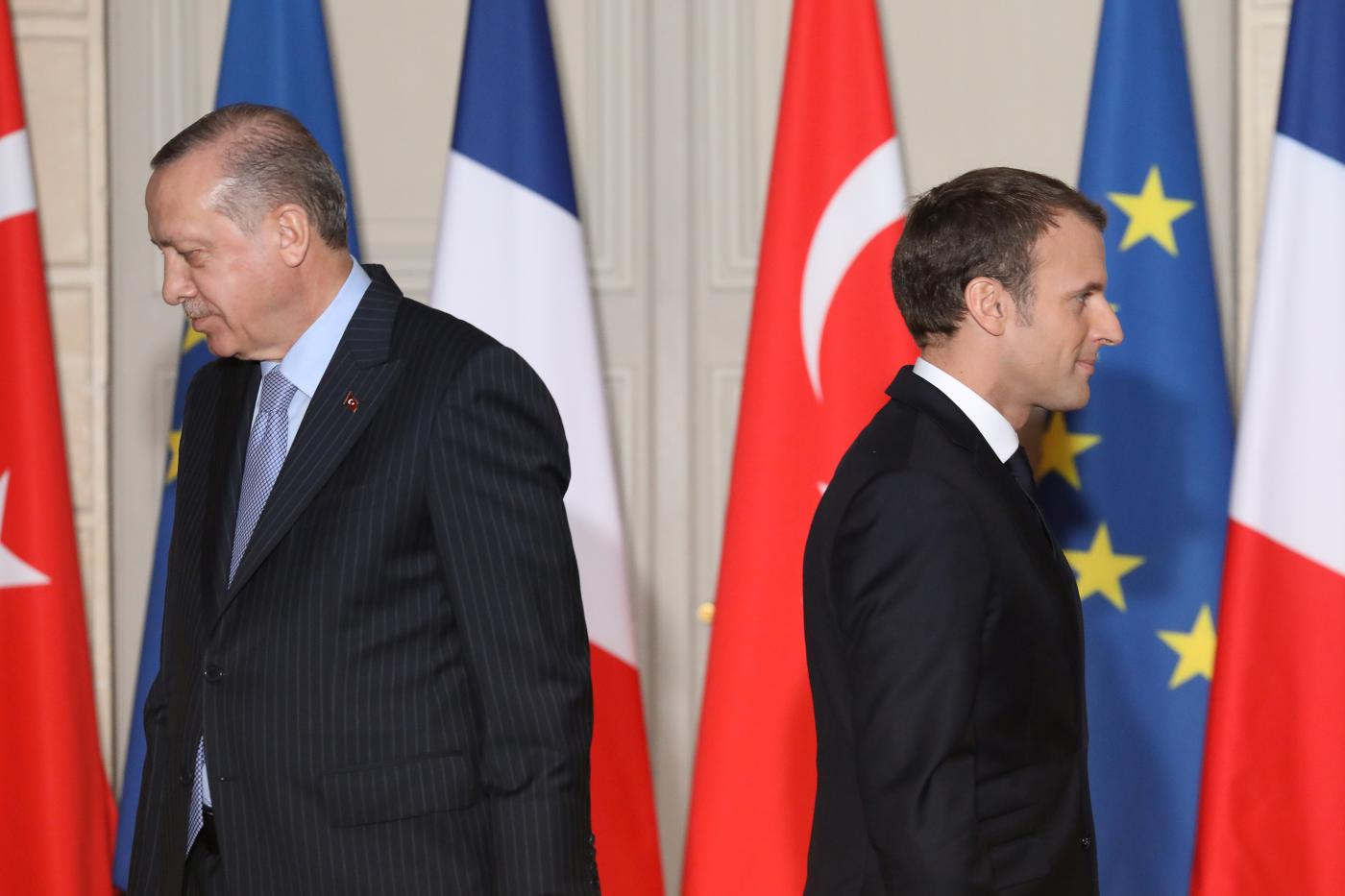 EXECUTIVE SUMMARY: The beheading of schoolteacher Samuel Paty, which occurred two weeks after a momentous speech by President Emmanuel Macron in which he unveiled a plan to defend French secular values against “Islamist radicalism,” marked the start of what might turn out to be an all-out war between France and the Islamic world, with Turkey’s Erdoğan leading the Muslim charge. By taking a stand against Muslim extremist violence and suppression of freedom of speech, Macron might find himself facing a new wave of Islamic terror.

On October 2, 2020, French president Emmanuel Macron made a momentous speech in defense of secularism. In the address, he unveiled a plan to defend French secular values against “Islamic radicalism.”

Two weeks later, on October 16, a French history teacher named Samuel Paty was decapitated in the street outside his school by an 18-year-old radical Islamist. The terrorist, a Russian-born teenager of Chechen heritage, succeeded in sending a deeply shocking message to supporters of laïcité, or French secularism: Islamic radicalism in France has no intention of going down without a fight.

The purported reason why the murderer, Abdoullakh Abouyedovich Anzorov, targeted Paty was that Paty had shown his students the cartoons of Muhammad published by the satirical paper Charlie Hebdo in 2015—images that prompted the invasion of the paper’s offices and massacre of its journalists by Islamist fundamentalists. In his speech prior to Paty’s murder, Macron had stated that France would not “renounce the caricatures”—in other words, France stands firmly in support of freedom of speech and will not be cowed by terrorism.

Macron’s speech was almost immediately followed by accusations from Muslims both at home and abroad that Macron is Islamophobic and racist. This furious response was especially strong in Turkey, as about half the imams in France are of Turkish descent.

In the October 2 speech, Macron attempted to be nuanced about how Islam and French secularism could be integrated. He unveiled a plan to defend French secular values against “Islamist radicalism,” adding that Islam was “in crisis” all over the world. He insisted that “no concessions” would be made in a new drive to push religion out of education and the public sector in France.

Macron said the measures were aimed at addressing the problem of growing “radicalization” in France and improving “our ability to live together.” He emphasized that “secularism is the cement of a united France,” but added that there is no sense in stigmatizing all Muslim believers.

Macron’s plan focuses on limiting foreign influence and investing in a new generation of French imams, with a certification process based in France. He categorized “Islamist separatism” as a “parallel society” that threatens France by holding sharia law above French law, which “often results in the creation of a counter-society.” Macron said the government will submit legislation in December 2020 designed to “reinforce secularism and consolidate republican principles.”

A meaningful act that went under the radar occurred on July 7, 2020, when a French Senate Inquiry Commission, headed by Jacqueline Eustache-Brinio, presented a report entitled “Islamist Radicalization: Facing and Fighting Together”.

The report describes the situation in France this way:

Islamist radicalism is not just about the issue of terrorism or transition to violent action, but also involves behaviors that can be peaceful and do not lead to violence. It may be the work of groups that advocate identity, withdrawal or entry into the associative and political world. …The groups that historically, like the Muslim Brotherhood, are active in France and seek to impose their views through networks of association seek recognition of authorities and, more recently, opt for integration in the electoral roll.

Faced with the rise of Islamism, the authorities have focused, since 1995, on the terrorist threat and the obstruction of violent action. This concern has resulted in the setting in place of a complete legal arsenal and the structuring of interior security services so as to respond to the threat. But the problem now facing French society has changed its nature: It is a multiform Islamist reflecting himself in all aspects of social life and tending to impose a new social norm by prevailing [upon] individual freedom.

Among the Commission’s main proposals, the following should be emphasized:

1. Know, follow, and prevent the actions of radical Islam.

2. Continue to strengthen the human resources assigned to domestic intelligence, taking into account the multiplicity of missions allocated to it and the scope of geographical areas of its field of action. Ensure, as much as possible, a specialization [of] agents on the monitoring of radical Islam movements.

3. Urgently set [up] an inter-ministerial committee for the prevention of radicalization, and set up departmental units to fight Islamism and evaluate radical activities.

4. Since the Islamists seek to destabilize our society and gain recognition of their right to rule [according to] the Muslim faith, the response of the public authorities must above all avoid interfering in Muslim religious worship. Further, it is imperative to refrain from stigmatization of Islam, since there is no such thing as a unified Muslim community, nor is there a single Islam.

The Inquiry Commission refutes the idea that Islamic radicalism is only a reaction to “Islamophobia,” but states that challenging the values of the Republic by promoting sharia should not be tolerated.

It’s fair to assume that the Senate’s commission report inspired Macron’s rhetoric on October 2. However, though his intentions were constructive, it appears that his delivery missed the target. The speech was distorted and instantly became a source of grievance across the Islamic world. At the forefront of the furious Islamic response was Turkish president Recep Tayyip Erdoğan.

Turkey is already embroiled in a number of disputes with France. These disputes—over Syria, Libya, NATO, gas exploration in the eastern Mediterranean, and Armenia—each have their own context and specifics, but they all stem from French suspicion of Erdoğan’s ambition to lead a Sunni Islamic revival.

Erdoğan seized on Macron’s speech as an opportunity to position himself as both leader and spokesman of the Arab and Islamic world. On October 26, he sounded a call for the boycott of French goods, claiming: “It becomes more and more difficult to be a Muslim and live an Islamic lifestyle in western countries.” He described Macron as mentally ill.

Erdoğan’s s tirring up of Islamist ire has resonated across the Arab world. The French ambassador to Pakistan was summoned to condemn Macron’s alleged incitement of Islamophobia. From Sanaa to Riyadh, Macron has become a one-man axis of evil. French products are being boycotted. Le Train Bleu restaurant in Doha, Qatar’s “quintessential Parisian dining experience,” is hastily re-sourcing its products.

Several French Muslim intellectuals harshly criticized Macron on social media. One said “the president described Islam as ‘a religion that is in crisis all over the world today’. I don’t even know what to say. This remark is so dumb (sorry it is) that it does not need any further analysis … I won’t hide that I am concerned. No mention of white supremacy even though we are the country that exported the racist and white supremacist theory of the ‘great replacement’ used by the terrorist who committed the horrific massacre in Christchurch.”

Another was even tougher: “The repression of Muslims has been a threat, now it is a promise. In a one hour speech Macron buried laïcité, emboldened the far right, anti-Muslim leftists and threatened the lives of Muslim students by calling for drastic limits on home schooling despite a global pandemic.”

The New York Times was highly critical of Macron’s plans, writing of a “broad government crackdown against Muslim individuals and groups.” American sociologist Crystal Fleming, an expert on white supremacist groups, tweeted: “It is beyond sad to see French officials respond to violent extremism with violent extremism…”

President Macron thus finds himself in a very difficult position—not only vis-à-vis Islamists but also among his own cabinet ministers. Interior Minister Gérald Darmanin used the language of the hard right, describing France as fighting a “civil war” to defend the French secular and unitary Republic against the “separatist” teachings of extremist Islam. Darmanin suggested that ethnic food aisles in supermarkets be closed—in other words, punish innocent French Muslims as well as guilty ones. According to the investigative newspaper Le Canard Enchainé, Macron has asked Darmanin and other ministers to cool their language.

Macron, who was elected president in 2017 following two years of bloody terror attacks in France, is heading into a 2022 election campaign, and expects to succeed where his predecessors failed. He might have bet on the wrong horse, however. Defeating radical Islam needs strong action, but Western governments must try to find a path of compromise to break the cycle of reaction and counter-reaction that creates more extremism and violence.

The French far-right leader Marine Le Pen sees no reason for prudence or tolerance toward Islamists in France. Her reaction to Paty’s beheading was to repeat over and over again that “massive uncontrolled” immigration is at fault for this kind of atrocity.

Considering how fragile the situation in France has become, as well as the anger that has developed between Paris and Arab and Muslim states, there appears to be a high probability of a new wave of radical Islamist terror operations against France and France-related assets. The rage directed toward Macron’s statements, which are being taken as evidence of French Islamophobia, creates a common denominator between Sunnis and Shiites, in that both streams feel hurt and humiliated.

According to reliable intelligence sources, there are several sleeper cells of Islamic terrorist organizations in France as well as in other countries in Western Europe that can be activated on short notice.

Important French interests in the Arab world might be economically hurt by the explosion of anger, and there may be diplomatic deterioration between Arab states and Paris.

President Macron faces a tough dilemma: stand firm and implement the measures he outlined with respect to radical Islamism in France, or reassess that policy and put his chance of reelection at risk.

Dr. Raphael G. Bouchnik-Chen is a retired colonel who served as a senior analyst in IDF Military Intelligence.

Disclaimer: The original article, written by By Col (Res.) Dr. Raphael G. Bouchnik-Chenis can be read in full in the BESA Center Perspectives Paper No. 1,790, October 30, 2020 –  developed by our friends at The Begin-Sadat Center for Strategic Studies (BESA)